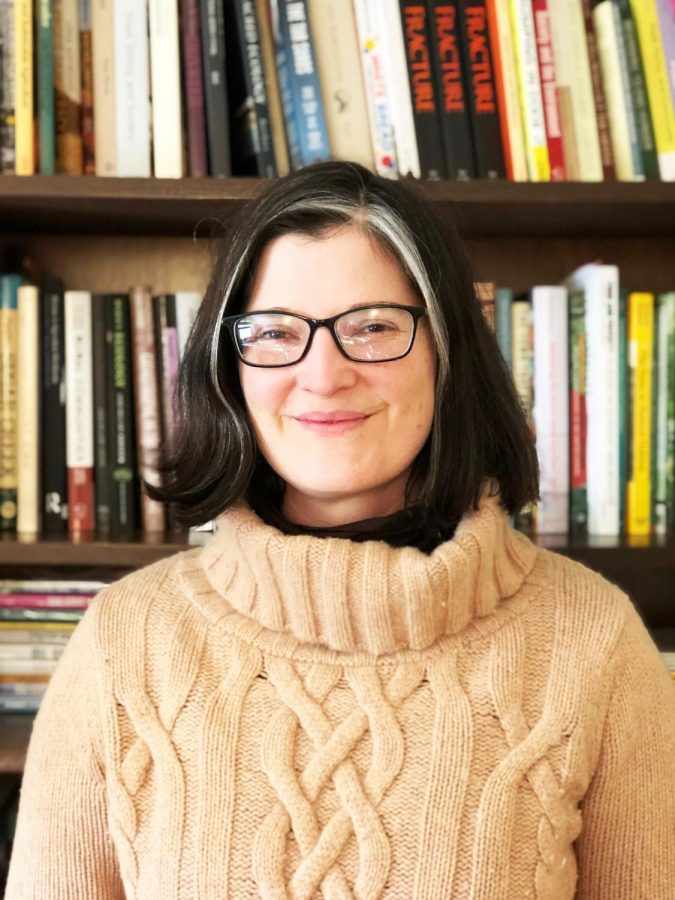 Even though she’s only been here at Tech for two years, Angie Carter has already made her mark, not just in the Social Sciences department, but also on campus.

Carter teaches classes for the new Sustainability Sciences Major that was made official this year. Between her Food Systems and Sustainability course to her Environmental Justice course, Carter is busy teaching and inspiring students to get more involved with the community. “This fall I just finished teaching a Communities and Research class. In that class, students do a community-based research project in partnership with some community group,” explained Carter. “This fall we were working on a preliminary report for the Western U.P. Food Systems Council, which is a new effort that is put together through the Keweenaw Bay Indian Community and the Western U.P. Planning and Development Region.”

Angie Carter has an extensive background in the topic of food sustainability. Originally from an Iowa farming community, Carter experienced first hand the farm crisis in the 1980s. “My dad was a large animal veterinarian,” said Carter. “I saw how the consolidation of agriculture really changed. The environmental landscape, the social landscape, the economic landscape, the community and what that all looked like first hand.”

“My PhD is in rural sociology and social agriculture. While many people think there isn’t any local foods and agriculture up here in the U.P., the truth is that there is. We have a long history of local food here because of the settlers who came here from Finland and those who came here to work in the mines.”

“I think people are interested in talking about more about the agriculture up here because we are so dependent on a very vulnerable system. Think about all the food at Econo or Walmart that has to be brought in on trucks, there’s more opportunity there for us to have more local food,” explained Carter.

While local food in the U.P. is one of her research areas, Carter also continues her research in Iowa, “I partnered with a group called Women through the Agriculture Network and we work on questions of gender and agriculture. We think a lot about women farmers, women landowners and how we can diversify agriculture. Around the world, women grow the most food, but for some reason here in America we have this idea of ‘Old MacDonald’ when actually farmers look much different,” said Carter.

Currently, it’s hard to get into the farming business. Because land is so expensive, it’s hard for those who would like to get into the business to start, “Many times, if you want to get into farming, you have to wait for someone [who owns land] to die or marry into a farming family because you could never afford land,” explained Carter.

“My work is really focused on different types of food systems,” said Carter. “I’ve been collaborating on campus with Kelly Kamm (KIP) who does a lot of research on public health and the first foods kids have access to and how it affects them.”

“Here on campus, we have the Husky FAN, which is the food access network or the food pantry located in the basement of the CDI. They get more food than they can give away before it expires. They don’t have refrigeration, so they can’t keep cheese or eggs, but if students needs those things they can access it through Econo,” said Carter.

“We did a focus group to try to learn more about the Husky FAN and how it’s working, and we found that around 24% of students on campus have experienced food insecurities, which is a pretty high rate. Students shouldn’t be in the position to think ‘Do I buy groceries or do I pay for gas this week?’. There’s food in the basement of the CDI that is open to all students, along with some personal care items like shampoo and deodorant,” explained Carter.

“It’s really exciting to see the new initiative taken about sustainability on campus from our president. Renewable energy and local foods need to be available to everyone, and communities are the ones who should be defining what they want these things to look like. I think we are positioned really well at Tech to give back to our communities and building bridges between us that will last and make a positive impact,” concluded Carter.