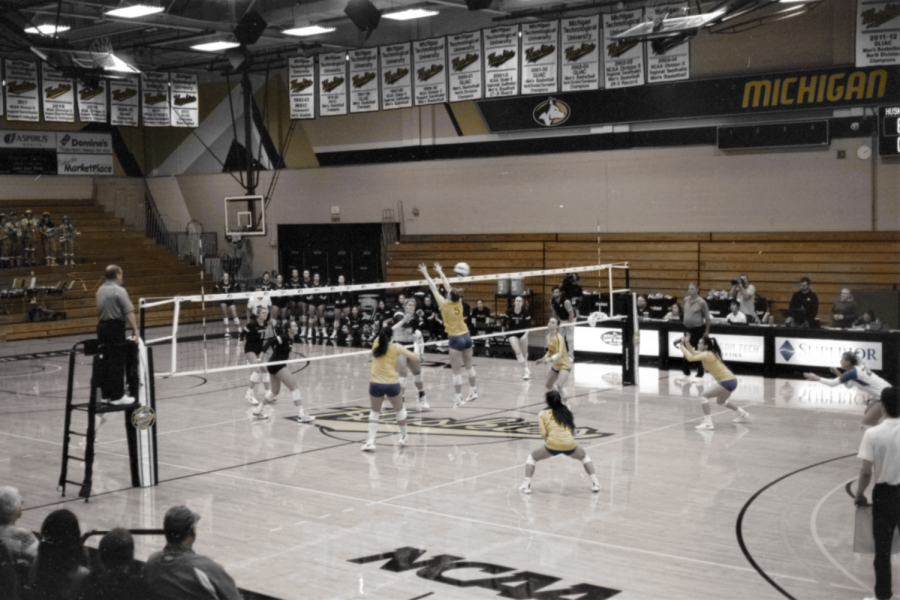 Michigan Tech won 3-0 breaking their previous three game loss streak. This brings the Huskies’ overall record for the season to 7-4 and scores them their first home GLIAC win.

The game started off strong for Michigan Tech with a 25-23 win in the first set. The Huskies quickly scored 10-0 to start off the second. They maintained a large lead throughout the set and ended with a fourteen point lead of 25-11. LSSU came back swinging in the third set resulting in twelve ties and nine lead changes. Despite their efforts, Michigan Tech came out on top, winning the final set 30-28 and securing the match victory.

“The whole team felt cohesive,” said Jillian Kuizenga, a senior on the team, during an post-game interview. When asked what specifically worked well, she responded, “I think what really helped is the passing in the back court that really kinda opened everything up.” Kuizenga got a career-high nineteen kills on Saturday, helping lead the Huskies to victory.

“It felt real good to get a win. I think that’s what these Huskies needed and I’m very proud,” said Michigan Tech coach Matt Jennings when interviewed after the match. “Kudos to Coach Zach for how he has that team playing, I don’t think the record quote reflects what that team is capable of,” said Jennings in reference to LSSU. “We responded well today and I’m happy we got the win.”

Some other highlights for the team include Olivia Heidel, who achieved a career-high on Saturday with 39 assists. Morgan Radtke had seven kills throughout the game and Janie Grindland got six kills. For defense, Carissa Beyer led the team with fifteen digs while Brooke Dzwik followed with twelve digs.

Michigan Tech plays Northern Michigan on Sept. 21 in Marquette. “That match, it’s gonna be a lot of fun,” says Jennings. The first set begins at 7 p.m. ET at the Superior Dome. Updates and more information can be found on Michigan Tech Volleyball’s social media sites.