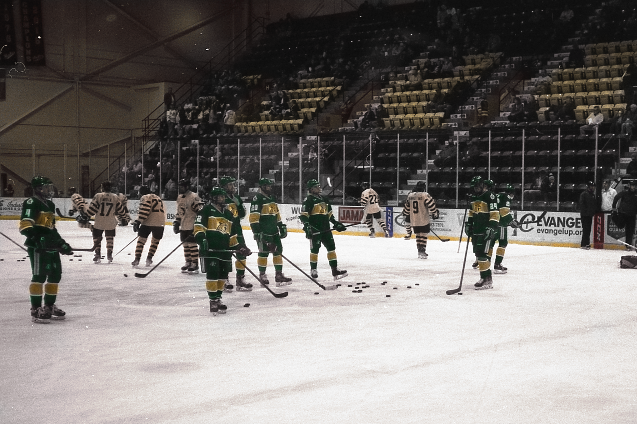 Michigan Tech vs. Northern Michigan this past Friday.

Michigan Tech Hockey split their home-and-home series with Northern Michigan last weekend. On Friday, Ryland Mosley scored a game-tying goal with just 66 seconds remaining. However, the Wildcats won in overtime, 3-2.  On Saturday, Nov. 13 Michigan Tech got revenge against the Wildcats. The Huskies trailed halfway through the second period, but they scored four consecutive goals to win, 5-2. Michigan Tech now stands at 5-4 overall with a 2-2 record in conference play.

On Nov. 12, Men’s Basketball opened with a sluggish start for regular season play, falling to McKendree University 74-59. Adam Hobson put up 17 points, while Owen White tallied 16. On Nov. 13, the Huskies defeated Lewis University 64-56. Eric Carl and Owen White each had 22 points in the win, Michigan Tech is now 1-1 for the season.

On Friday, the Women’s Basketball edged out Lewis University by a score of 75-71. The Huskies shot 50% from beyond the three-point line while Ellie Mackay, Daisy Ansel, and Alex Rondorf all put up double figures. Saturday was much easier for Michigan Tech as they rolled over William Jewell University 75-49. Sara Dax led the way for the Huskies with 17 points as the defense forced 20 Cardinal turnovers.

Michigan Tech women’s volleyball ended their season playing like they have all year: ruthlessly dispatching their opponents. On Nov. 12, the Huskies clinched their second straight GLIAC Championship after sweeping SVSU, 3-0. Laura De Marchi had 40 assists in the victory. The next day the Huskies walloped the Warriors with another 3-0 victory. Carissa Beyer had 21 digs and earned GLIAC North Player of the Week for her performance across the two games. The Huskies head into postseason play as the No. 1 seed in the conference and No. 25 team in the nation.

The Huskies’ season came to end on Nov. 9 after the Women’s soccer team lost to Northern Michigan in the GLIAC quarterfinals. The Wildcats scored seven minutes into the game but the Huskies responded with a goal of their own when Julia Pietila scored in the 31st minute. Erika Gabriel had five saves for the Huskies, but it wasn’t enough as Northern Michigan scored the go-ahead goal in the 56th minute. Michigan Tech finished 12-7 on the season.

It was the perfect finish for Men’s Football, who knocked off the Saginaw Valley State Cardinals, ending the year with a winning record for the first time since 2015. Will Ark opened the scoring for the Huskies with a 28-yard dart to Darius Willis. The next quarter the Huskies used up over 7 minutes of the clock before Jared Smith capped off the 82-yard drive with a rushing touchdown. The Huskies scored in the third quarter while the defense held the Cardinals to just three points in the fourth, sealing the 21-20 victory.