Why my cat Ozzy is my best friend 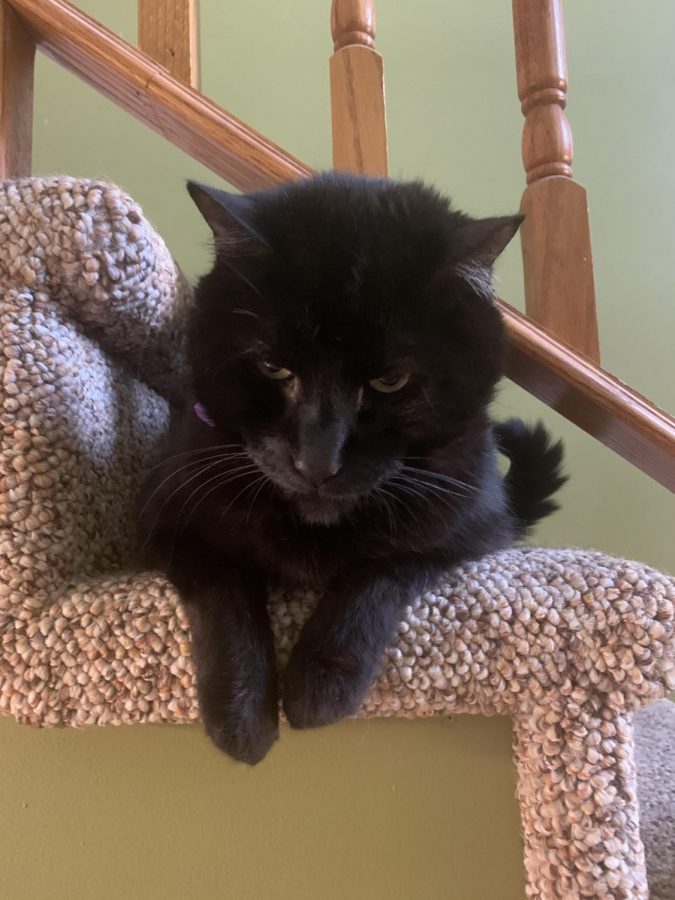 Pets seem to be generally accepted as family. All over my social media, I see pets being treated with grace and dignity. This has me thinking about my own relationship with my cat, Ozzy.

When I first heard about Ozzy, I wasn’t sure what to think: he can’t go outside without a leash or restraints and he was skittish around other cats. However, Ozzy came into my life when I wasn’t feeling the best. I hoped that Ozzy could help me balance my personal needs for affection and replace the gap in my life I felt. Fortunately, he’s accomplished that and more, teaching me about his own life, though I can’t constantly be home to enjoy him.

My greatest regret is constantly leaving Ozzy. When I inevitably leave my downstate home, I give Ozzy a goodbye hug. I always assure him I’ll be back, even if it’s just for a few minutes. And every time, he stares back with his soft eyes. Gazing into those yellow-green seas with their vertical, alien pupils, I see the very human response of confusion at my sudden leaving.

To me, the softness in his eyes is even more apparent. I feel his pain from his early declawing. He lost his defenses when his claws were pried out. I see the months of hunger Ozzy endured as he searched for a suitable place to eat. I see the surrender of life as he endured the torment of other stray cats, who bullied him mercilessly. I see yearning and affection, a look of fear and courage.  His purrs radiate a primitive rhythm of healing. It’s incredible how such an ancient method of vibration can comfort a modern soul such as myself.

I remember my first glance at him in the veterinarian’s waiting room. His eyes glanced through the cage, slowly staring up in a childlike curiosity. He didn’t act nervous towards me, but rather figured out what I wanted from him. I stuck a few fingers in his cage, stroking his forehead and having him learn my scent. His smooth, silky fur ran under my palm, as I rubbed against his nose. His lips held in a straight line, a face to maximize his courageous appearance. I hadn’t ever met a cat this stone-faced; usually, hints of emotion lingered in their expression. He didn’t even flinch at the needles at the veterinarian’s office, nor the necessary dental and physical examination. There was surrender on his end as if he accepted whatever fate passed into his life. I took him home afterward and cleaned him up with a damp rag and towels. He seemed to enjoy the small dinner I laid out for him afterward, as I got ready for bed. It got me into the role of a caregiver for him. Ironically, he also began caring for me.

Even if I’m not always around, Ozzy and I are caregivers for each other. I clean up his waste, fill his food and water bowls, and interact with him. All these behaviors keep him physically and mentally developing. At the same time, his cheerful response to these interactions selfishly satisfies my social cravings. I expect some recognition from Ozzy in return for performing these actions. However, I’m also selflessly improving his life by providing a comfortable foundation for his world. He’s realized that I’m trustworthy, and I’ll continue providing love and care if he shows it’s effective by laying on the ground with his belly in the air and his face rubbing against me. However, if he did stop providing these signals to me, I would still do what I could to take care of him.  In a way, we’re selfishly encouraging each other to provide for our needs, but it’s the manners in which we perform these needs that makes the both of us selfless.

As a selfish creature, Ozzy demands some independence. He often roams around the basement as his domain. Of course, I give him room to explore the area without getting into the closets or other rooms. This also means I leave my room door open for him so he can grab food, drink, or use his litter box whenever. I suspect that’s why he’s so open towards me; I see him for the animal he is. I don’t restrict him to a domestic lifestyle, and I give him territory to control.

Encapsulating the importance of animals is nearly impossible, as the bond between man and beast can’t be easily explained in language. Looking into Ozzy’s eyes helps me understand his primal state more, by showing his struggles through his eyes alone. Ozzy has truly proven himself to be my greatest friend in life so far.