The Lode turns 100: a centennial celebration 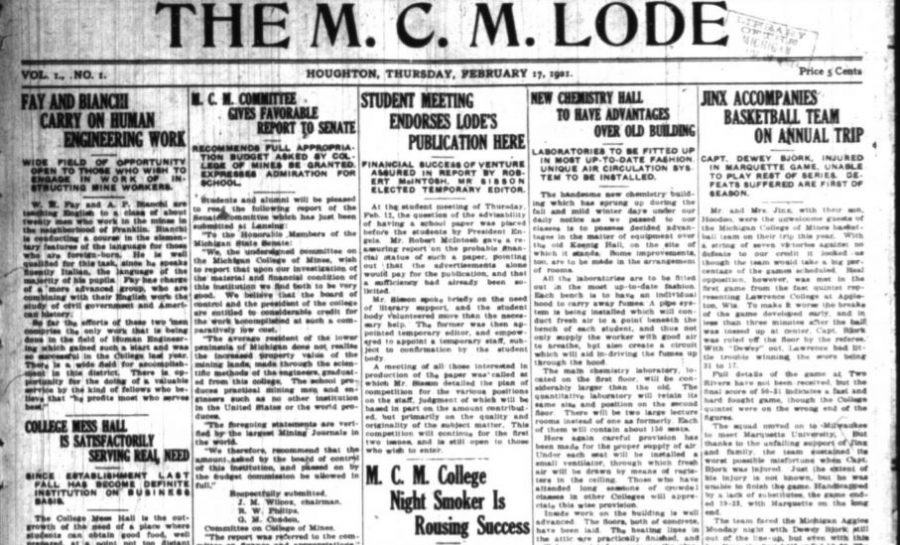 The first issue of the Michigan College of Mines Lode was published 100 years ago, on Feb. 17, 1921, by two M.C.M. students, Paul Van Orden and Charles Tate.

On Feb. 17, 1921, two Michigan Tech students published a novel idea: the university’s first student-run newspaper. At that time, Michigan Tech was known as the Michigan College of Mines (M.C.M.), and our prosperous university was a small, remote school which, 36 years earlier, had been formed out of necessity as the Keweenaw’s thriving copper industry required more mining engineers.

Students Paul Van Orden and Charles Tate were the founding members of the Lode, with Van Orden acting as the editor-in-chief and Tate handling the business aspects of their new venture. Tate and Van Orden wanted to name the newspaper something to honor the Keweenaw’s mining heritage, and thus the M.C.M. Lode was born. The first issue of the Lode cost five cents, and it covered a variety of topics relevant to students, including a satisfactory report of the mess hall, news of the school’s basketball team, and mention of a new chemistry hall. Before the age of digital and social media, the Lode was a great way for students to communicate the campus happenings with friends or family back home. They could subscribe to the paper and send articles of interest home.

In a letter from Tate, sent to the Lode’s 1971 staff as they planned a fifty-year anniversary celebration, the co-founder recalled the paper’s success. What initially began as a project fully-funded by Tate and Van Orden soon began to show a profit. This money was fueled back into campus as the student body took over operations. The funds from subscriptions and advertisements were used to fund the Lode and to support other student groups and organizations.

The Lode continued to flourish, eventually being taken over by Michigan Tech’s Board of Student Publications (BSP). The BSP was a student group that handled the running of multiple Michigan Tech publications, including the Lode, the Bull Sheet, the Keweenawan yearbook. Beyond the paper, past Lode staff publications have included a magazine for Michigan Tech’s centennial anniversary in 1985 and the Winter Carnival Pictorial, a photographic guide to every Husky’s favorite winter celebration. A supplemental paper, called the Labyrinth, was also published by the Lode during the 1970s. This quarterly publication included poetry, art pieces, and photography, though unfortunately little remains to document this publication today.

The Lode started publishing virtually at its current domain, www.mtulode.com, in 2008, though a different website had existed earlier. Today the Lode publishes both in print and online, free of charge, though in print publications are currently suspended due to the COVID-19 pandemic.

Throughout the years, the Lode’s main focus has been providing campus-relevant news addressing what the students want to hear. Despite a lack of interest in writing and journalism from the mostly STEM-minded student body, the Lode has flourished for 100 years as Michigan Tech’s longest-running student publication. The Lode staff today remains a group of students with diverse educational backgrounds. Whether a student comes to Michigan Tech with a focus on engineering or English, psychology or biology, every Lode member comes together each week with one thing in common: to publish relevant news to the campus community.

While many student publications and organizations have not survived throughout the ages at Michigan Tech, the Lode has. In the Lode’s 50th anniversary publication, past Special Anniversary Editor Neil Claflin spoke on the importance of the Lode’s success throughout the years: “The importance lies in the fact that this student newspaper was started by students, and effectively run by students without falling to a number of ills.” (Claflin, 1971, p. 2) He goes on to say that the Lode had maintained its autonomy in its first 50 years by running responsibility and efficiency, and it’s safe to say that those characteristics have carried it forward 50 more years to where it is today.

Stay tuned for more information regarding the Lode’s centennial year. The Lode staff is currently planning a virtual banquet for April 9, 2021. More information will be posted on our website and advertised on-campus. We would like to give a special thanks to the Michigan Tech Archives and Copper Country Historical Collections for use of their resources in the compilation of this article, as well as the many Michigan Tech alumni that have passed through the Lode’s staff rankings throughout its 100 years.

If you are interested in being a part of the Lode’s Centennial Celebration, please reach out to [email protected]