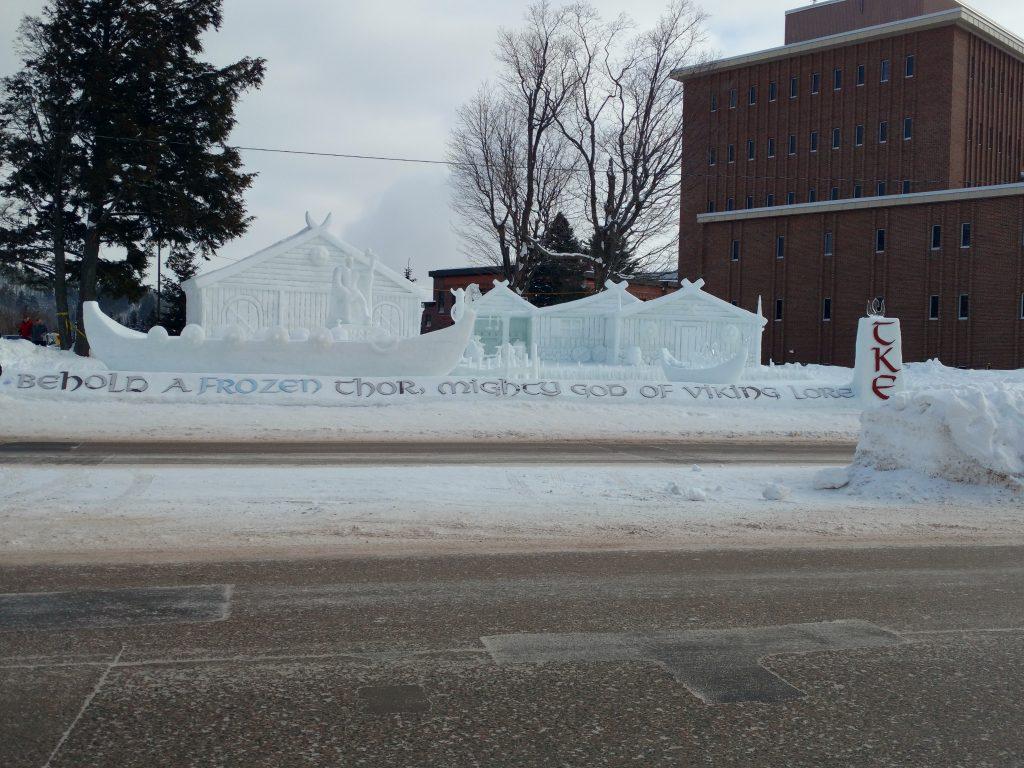 Pictured above is the winning snow and ice sculpture for the month-long competition by Tau Kappa Epsilon including a traditional viking longboat and Thor.

The blues of winter are often brushed away just by the thought of the ‘Winter Carnival’ with the best part being all these wonderful events to attend and no classes to make it even more of a fun, long weekend. Winter Carnival first began in the year 1922 as a one-night festival and was formerly known as the ‘Ice Carnival’, with students dressed as animals, and was celebrated only in Houghton. As the popularity rose in the coming years, many more events were added, such as the Winter Carnival Queen in 1928, and the two-game home hockey series in the 30’s. The year 1936 saw a great surge in enthusiasm for the Winter Carnival in the entire Upper Peninsula. Snow sculptures were built by students and organizations and prizes were given on the basis of the intricacy and relevance to the theme. Over the next few decades, various other events were introduced which received overwhelming appreciation and extended the tradition to a four day weekend with bands and artists performing and food and dance adding to the merriment.

This year, the carnival commenced on the evening of Wednesday, Feb. 7 after classes ended, although the preparations for the all-nighter had begun weeks ago. Easily the biggest attraction was the month-long statue competition and this year’s winners in the men’s division were the Tau Kappa Epsilon fraternity with a gigantic series of Nordic-themed sculptures and a figurine of Thor, the god of skies and thunder of Norse mythology. Their statue read, “Behold a frozen Thor, mighty god of Viking lore” with a traditional long ship looming behind it. The second and third places were grabbed by the Phi Kappa Tau and Delta Sigma Phi groups respectively. In the women’s division, Delta Phi were the champs beating Delta Zeta and Alpha Sigma Tau who took the second and third spots respectively. Phi Kappa Tau was led by Olivia Bradford, a third-year student from the mechanical engineering department and Emma Rife, a third-year student of the Civil Engineering department. Jeena Scheffer, a third-year student majoring in Marketing said, “Olivia and Emma are the ones who piloted the entire thing. They have been putting about 40 hours every week to make this happen. This has been so much fun! And I have been looking forward to it since the start of the semester!”

This group of ladies, who were working in temperatures which dropped well below zero degrees Fahrenheit after sundown, were an example of the spirit of huskies and were a model of teamwork and coordination. Speaking about the cold, “It doesn’t bother us anymore, you get kinda used to it after some time” Jeena said with a smile, while gracefully ironing the horse and the castle of Rapunzel as it gleamed in the soft light. The winners for the All-Nighter statues category were the St. Albert the Great Church, Lutheran Campus Ministry and the InterVarsity groups showing their sculpting skills throughout the night.
The carnival is never complete without the Chili Van and as always it was mobbed by students for the delicious hot broth with black peas it served throughout the night, stopping by various organizations and relieving them of the harsh winds. The Centre for Diversity and Inclusion was one of the favorite spots to eat and refresh as they served a mouth-watering menu of Buffalo wings, meatballs, cookies and fruit punch with a cozy ambiance to hang around in. In front of the Hamar House was the statue made by the group of Performing Arts, undergraduate students and the residents of Wadsworth Hall. Sudanshu Narkhede, a first-year undergraduate student majoring in mechanical engineering said, “Hunter Storie is the one guiding us. [The statue] is a huge thing, we are currently working in shifts. There’s no fixed time but we do try to maintain at least a few members for each of the tasks, and when it’s done, they can either go and warm themselves up or join the others. Right now, I’m carving the base, and as soon as someone releases me, I have to arrange for one more water hose”, he said. When asked how the weather affected their work, “Well, I just hope it doesn’t melt soon. I mean, we have been putting a lot of efforts for past few days now. We do have to take regular breaks away from the snow and keep ourselves hydrated all the time.”

The Film Board hosted a screening of the famous ‘Ice Age’ movies on a loop for free, the entire night in the Fisher Hall. Also, pancakes were available till 4:00 am sponsored by Guardians of the North as students made their way into the Fisher Hall in search of warmth. The results were announced for the Queen’s Coronation with Cora Taylor who is a fourth-year student studying Mechanical Engineering bagging the numero uno place, Caroline Spezia, a fifth-year chemical engineering student was the first runner-up and Grace Carey, a fourth-year, dual major in biomedical and pre-medicine was the second runner-up and also received the Miss Congeniality spot. To add to all these grandiose events, there were also events like the Beards competition, Broomball, Snowball and Rail Jam, sponsored by Boardsports Enterprise to name a few. A karaoke event was held in the MUB commons with a number of participants flaunting their singing skills, crooning along with the music and drinking hot chocolate, also served by the Memorial Union Board.

Thus, the Winter Carnival began with a majestic atmosphere, a feeling of pride and joy, synchronous with the loud cheers of the Husky Pep Band amongst all those intricately carved statues as the merrymaking and recreation carved even more beautiful niches in the memories of every husky alike!