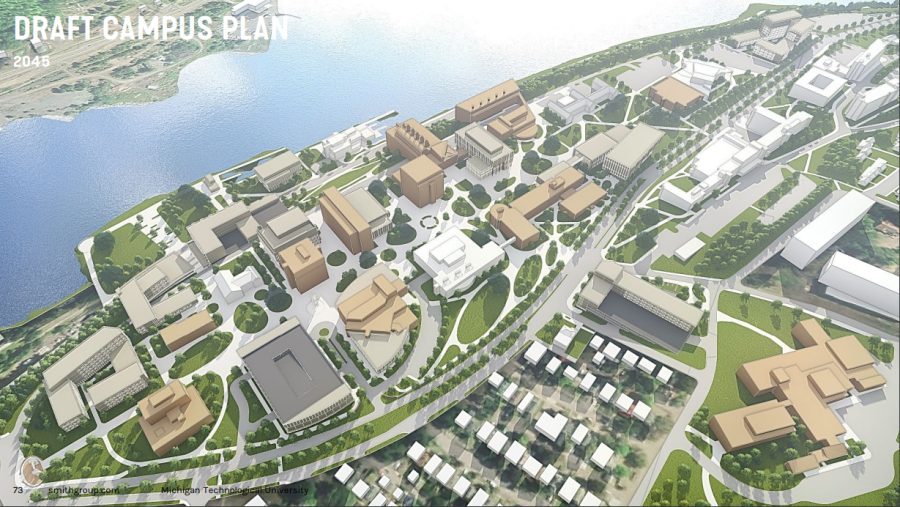 A draft of the Master Plan.

Community meetings were held Jan. 24 and 25 in the MUB to discuss upcoming modifications to Michigan Tech’s campus. SmithGroup, an engineering design and architecture firm represented by Douglas Kozma and Jon Hoffman, partnered with campus administrators to present the final draft of the Master Plan. Over 40 community members, including staff, faculty, and graduate students, met to learn about and discuss the proposed project. It was the latest of a series of meetings which began November of 2021.

Within the next four to ten years, students can expect changes in the MUB dining experience, expansion of the SDC’s locker rooms, reinvestment in first and second year student housing, and construction of a new building, the HSTEM. New research facilities, teaching laboratories, and increased accessibility to dining and bathrooms are also anticipated.

Ending in 2045, the Master Plan is a far-reaching, sweeping project which would expand the campus, including three new areas: the Downtown Gateway, the East Gateway, and the Link. To the west, the Downtown Gateway, located along Cliff Drive, would consist of housing for first and second year students, including additional recreational rooms and dining facilities. It would require the removal or reconstruction of College Drive, but additional roads and transportation, including bike trail and mass transit, were accounted for.

The East Gateway would be located near the current McNair facilities along Townsend Drive, and would take advantage of the wonderful waterfront view available to celebrate the entrance to campus in a more visually appealing way. The parking lot displacement by proposed construction would be, by policy, required to be replaced, so the East Gateway would incorporate a two-story parking area.

The Link, located between McInnes Drive and Highway 41, would be geared towards graduate and upper division undergraduate students, and consist of apartments, embedded parking facilities, and kitchens. These housing options would be constructed to accommodate the predicted influx of students in the coming decades.

New research facilities geared towards interdisciplinarity and flexibility are to be constructed in the Mall area. Two buildings, the HSTEM and the Research and Industry

Innovation Centers are planned for the present-day Fisher/Rekhi area, and a research facility near the waterfront. Also along the waterfront, recreational opportunities such as a climbing wall, cardio facilities, and campfire areas have been proposed.

The Master Plan consists of a complete overhaul of neglected infrastructure, potentially breathing life back into older buildings and reinventing Campus into a more effective, modern, and connected facility. The Master Plan will be presented to the board of trustees in February. A “Roll Up Your Sleeves” session is planned for mid-to-late April 2022. More information about the Master Plan including maps, discussions, and opportunities to get involved can be found at https://www.campusmasterplan.mtu.edu/