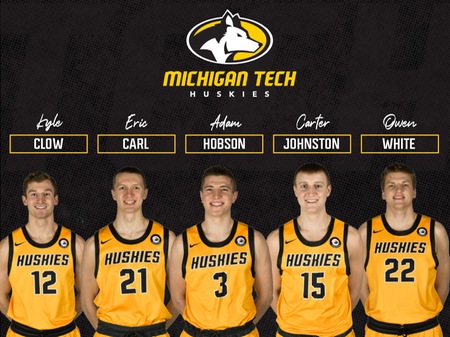 White, a native of Rhinelander, Wisconsin, has already earned numerous accolades for his play on the court this season, including NABC All-Region first team and NABC All-America. Earlier in March, White was the Great Lakes Intercollegiate Athletic Conference Player of the Year as well as All-GLIAC First Team, and All-GLIAC Defensive Team. He was also chosen as GLIAC Player of the Week on three occasions throughout the 2020-21 campaign.

White played in and started 21 games for the Huskies and led the squad and the conference with 21.2 points per game shooting 48.3-percent from the field. He reached double-figure scoring totals in every game and scored a career high 33 points on March 7 in the conference championship against Ashland. He also marked 30 points at home against Grand Valley State on Feb. 20. White’s team MVP award comes after he earned last year’s Bill Gappy Award given to the Most Improved Player on the team.

This season, Eric Carl was the Huskies most improved player. The sophomore from Kaukauna, Wisconsin started all 23 games and finished second on the squad with 11.8 points per game. Carl led the GLIAC with 64 made 3-pointers and was second in the conference with a 49.6-percent 3-point percentage. He scored a season high 24 points against Saginaw Valley State on Feb. 5 going 5-for-7 from beyond the arc.

Carter Johnston, a junior guard from Beaverton, Michigan was honored with the Harold Meese Sportsmanship Award for 2020-21. Johnston was the conference leader in assists (127) and assists per game (5.5). Johnston had a pair of games with 10 assists and held an assist to turnover ratio of 2.5.

For the third season in a row, Kyle Clow was Tech’s Scholastic Achievement Award honoree. Clow, a junior from Germantown, Wisconsin, is a Mechanical Engineering major and has twice been a GLIAC All-Academic Excellence Team selection. Academic Excellence Teams are comprised of student-athletes that have a cumulative GPA of 3.50-4.00. Clow appeared in 19 games this season and scored eight points on Feb. 26 against Wisconsin-Parkside.