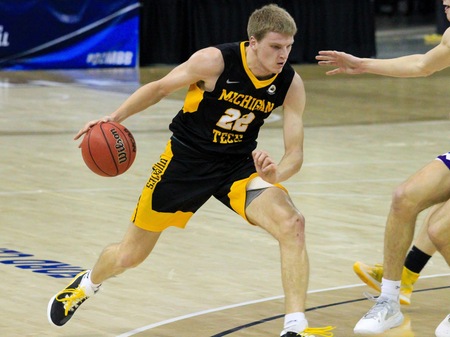 White, a native of Rhinelander, Wisconsin, has already earned numerous accolades for his play on the court this season. Earlier in March, White was the Great Lakes Intercollegiate Athletic Conference Player of the Year as well as All-GLIAC First Team, and All-GLIAC Defensive Team. He was also chosen as GLIAC Player of the Week on three occasions throughout the 2020-21 campaign.

White played in and started 21 games for the Huskies and led the squad and the conference with 21.2 points per game shooting 48.3-percent from the field. He reached double-figure scoring totals in every game and scored a career high 33 points on Mar. 7 in the conference championship against Ashland. He also marked 30 points at home against Grand Valley State on Feb. 20.

White finished second on the squad with 6.4 rebounds per game and added 2.3 assists, 1.1 steals, and 0.9 blocks per outing. He was an integral part of the Huskies post-season run to the NCAA Midwest Region Semifinals and helped Tech win two games in the GLIAC Tournament as well as the GLIAC North Division regular season title.