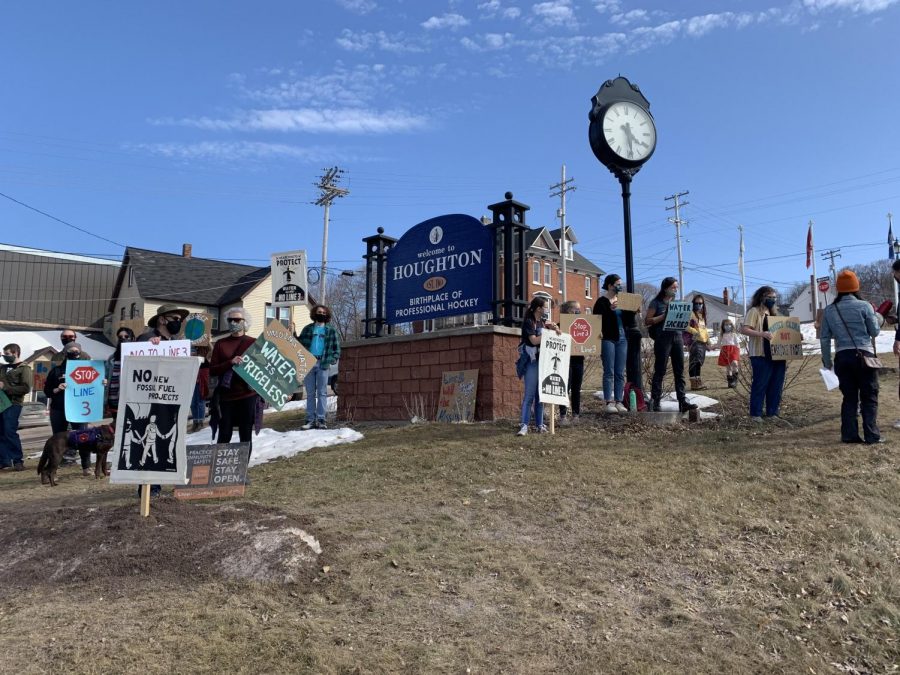 Protestors take a stand to show their love for the environment

There has been discussion in America, despite Covid-19 and other political events, about climate change and how to deal with it. Already, there are potential signs of its consequences, from raging wildfires across the Northwest to the freak snowstorms of Texas. Despite the potential to contribute to climate change, companies such as Enbridge want to continue their business in the oil industry. One such project they’re currently working on is Pipeline Three, or Line 3, an oil, natural gas line that would run from north Manitoba to Superior, Wisconsin. It runs near Lake Superior’s shores and carries the risk of an oil spill into Lake Superior. Additionally, the pipeline runs through Native American reservations and communities. In pursuit of climate change activism, the Keweenaw Youth for Climate Action spreads information and creates projects to give back to its community on and off campus.

Last Saturday, the KYCA held a protest at Houghton’s Veterans Park near the bridge. People were masked and socially distanced as they carried their homemade signs. Students and community members stood together to protest Line 3’s construction. At the forefront was Gabriel Ahrendt and Elise Rosky, two leaders of the KYCA. They stood near the traffic below the protestors, reading off facts of the Line’s harmful effects and the tactics Enbridge uses to get its projects done. People passing by in cars voiced their opinions as well, by holding out thumbs up and honking in support or yelling out their disagreement.

At the rally, Ahrendt relayed his group’s experience when visiting Cloquet, Minnesota. “Last weekend [March 13 and 14], a group of us went to the pipeline near Grand Rapids, Minnesota. We drove along the Mississippi River with cop cars tailing us, and they threatened to arrest us if we blocked traffic for our protest.” They claimed that the oil corporation Enbridge funds the police forces in that area to keep protesters under control. Protesters were pepper-sprayed, beaten, and arrested for speaking their minds against the Line 3 project.

People interested in giving to the cause can donate through the following links provided by the KYCA at their protests. This link leads to a donation page for the Giniw Collective Fund, an indigenous group at the frontline in Grand Rapids, Minnesota. A GoFundMe for the RISE Coalition supports their conservation efforts for their homeland in Minnesota. Both donation sites help bail out arrested protestors and support the groups’ conservation efforts.

Small papers with several links were handed out at the protest. One contains a petition asking Michigan Tech to stop funding fossil fuels and to reinvest in alternative fuels. At the protest, Ahrendt stated 50 more signatures were needed to reach their ten percent of the student population goal.

Ahrendt clarified that he was a cofounder of the Keweenaw Youth for Climate Action, along with Elise Rosky and Anna DeBraber. He states the Climate Action group was formed back in 2019, when a Fridays for Future protest occurred in Houghton: “It inspired us to start our own movement. We wanted to bring regular community climate change activism to campus and the Keweenaw.”

Ahrendt spoke about how vital youth movements are to fighting climate change and its perpetrators. He stated how young leaders like Greta Thunberg are vital for inspiring youth movements. Their energies and voices are what bring others together to fight for a cause, a task not easily achieved.

Since the Climate Action group began, there have been changes on and off campus. According to Ahrendt, more sustainability groups sprung on campus. Michigan Tech has also funded projects like the Sustainability Demonstration House. “We’ve met with communities like the Keweenaw Bay Indian Community and the Keweenaw Land Trust to discuss sustainability for the future. We’ve also met with Will Lytle, the Mayor Pro-term of Hancock, about projects.” These projects include planting fruit trees in Hancock as a promotion for growing produce and recycling drives to educate and give people places to recycle.

When asked about how people can get involved or start their own conservation groups, Ahrendt advises to organize a group of people, no matter the size. A new group will need to make connections across their communities and participate in other rallies/events. He acknowledges this will take time, but it’s an exciting process to get a group going.

For more information on the nationwide Line 3 protests, you can visit this website.