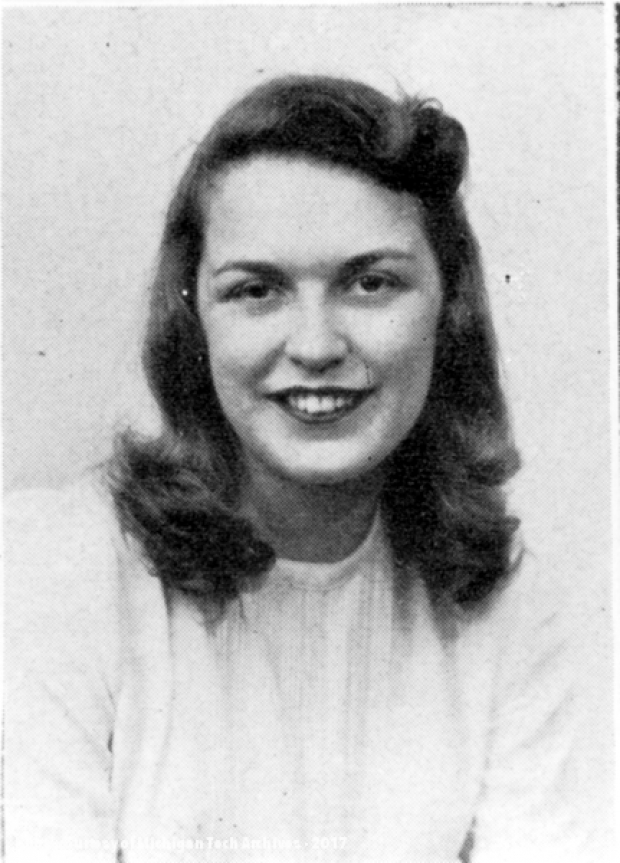 One of her involvements was with the Lode, where she was our first female editor-in-chief!

In celebration of Lode’s Centennial, we’ve taken a deep dive into our archives, and those of the Michigan Tech Archives, in search of interesting and unique details about the Lode’s past. During our research, we uncovered a news article about a Michigan Tech student named Margaret Waters, who in 1944 became the first woman to act as editor-in-chief of the Michigan Tech Lode. In honor of March being Women’s History Month, we decided to dig deeper into her story, as we look back on a monumental past member of the Lode’s team.

Margaret Waters-Perlich was born on Oct. 15, 1924 and raised in the Copper Country mining community of Allouez. The only daughter of Russell and Margaret Waters, a copper miner and schoolteacher respectively, she excelled in school and was named valedictorian of her class at Calumet High School. She went on to continue her education at Michigan Tech, which was known as the Michigan College of Mining and Technology during the time of Waters’ enrollment. She was very involved on campus, within the Lode as well as the Theta Chi Epsilon Sorority. She studied Chemistry, and was recognized for her accomplishments in the national award listing “Who’s Who Among Students in American Colleges and Universities” among other Michigan Tech students during the year 1946.

During Waters’ time at Michigan Tech, the country and the university were reeling from the aftermath of World War II. The Lode had momentarily halted publication during some years of the war, and it was unknown whether or not the university’s newspaper would continue. Waters took on the reins as editor-in-chief in 1944, and her leadership helped bring the Lode back to life. Today, the Lode continues to thrive. Without Waters’ leadership back in the 1940s, one can’t help but wonder if the paper would have ever recovered after World War II.

After graduating Phi Beta Kappa, Waters went on to marry her longtime sweetheart Frank Perlich. They were married for 62 years and raised two sons. She worked as a chemistry teacher, where she was able to use the education she valued so much to teach further generations. Margaret “Muggs” Perlich passed away in 2016, and her obituary lovingly describes a vivacious and passionate woman who lived a wonderful life.

We would like to extend a special thanks to the Michigan Technological University Archives and Copper Country Historical Collections for use of their Keweenawan yearbook collection and other research documents. We would also like to thank Margaret Perlich’s family, whose descriptive obituary helped us fill in the gaps in the life of a woman who had a great impact on our newspaper.