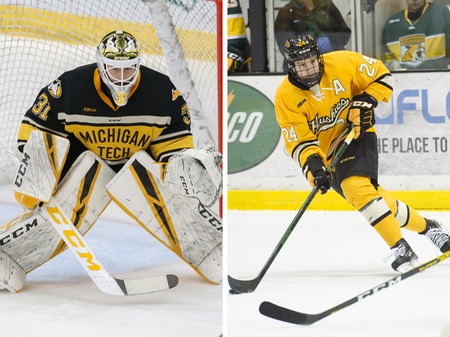 Michigan Tech sophomore Blake Pietila was named the WCHA Goaltender of the Week and junior Colin Swoyer is the WCHA Defenseman of the Week the league announced Monday (Mar. 1).

Pietila earned the award for the third time this season after he led WCHA goaltenders with three wins last week and 88 saves. He ranked second in the WCHA with a .957 save percentage and 1.32 goals-against average. Pietila leads the WCHA this season with a .939 save percentage and is second with a 1.65 goals-against average. His 14 wins rank fifth nationally.

Swoyer received the award for the fourth time this season after he tied for the WCHA defensemen lead with three points last week. All three points came in the sweep of NMU. The Hinsdale, Illinois native scored Tech’s second goal on the power play Saturday and assisted on the first goal that was also on the power play. He led blueliners with 11 shots on goal and was second with nine blocked shots. Swoyer also helped the Tech penalty kill go 9-for-10 over the week. He is second in scoring amongst WCHA defensemen with three goals and 13 assists.

The No. 19-ranked Huskies are 17-8-1 overall and 7-5 in the WCHA and have won three straight games. Tech wraps up the regular season at No. 4 Minnesota State this weekend. The puck drops at 8:07 p.m. Friday and 7:07 p.m. Saturday at the Mayo Clinic Events Center in Mankato.