I believe in Stardew Valley superiority 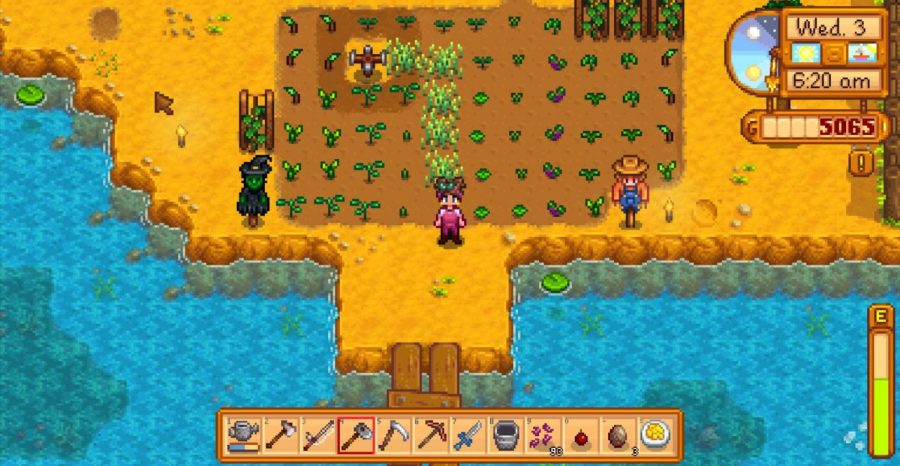 Stardew Valley offers players the chance to cultivate a farm from the ground up, including growing plants and raising animals. Here’s a clip of my farm.

Okay, I know I’m going to get hate for this. After all, I’m not a “gamer girl” — not by a long shot. When someone like me voices an opinion on video games, we all know how it tends to end: poorly. I don’t spend hours grinding away at Valorant or CS:GO, and I don’t religiously follow Twitch streamers. I can barely hold my own against greasy middle schoolers in Fortnite, and I refuse to diversify my skills in Super Smash Bros. by playing any character but Princess Peach. Nonetheless, I have an opinion on video games, and I believe one game takes the cake as being the Best One Ever™. What game is this, you ask? Stardew Valley, of course!

For those of you unfamiliar with this elite role-playing simulation game, I’ll give you a brief overview. Your character, bored with their unfulfilling life in the dull world of a fictional corporation, quits their job and takes ownership of a farm left to them by their late grandfather. The farm, located in the quiet community of Pelican Town, which sits in the heart of beautiful Stardew Valley, is yours to fix from the ground up. As you rotate through the four seasons, you can grow a variety of crops, raise livestock, forage for natural resources, go fishing for different freshwater and saltwater species, explore the deep layers of a mineral-rich mine, and form important connections with the local NPC (non-playable character) townsfolk. An entirely new world truly awaits you in Stardew Valley.

While this game doesn’t offer the competitive aspect that many people enjoy in video games, it does offer hours of endless fun. I quite like the fact that it doesn’t showcase violence or competition. It provides a relaxing atmosphere that can sweep me away from the stressors of life as a college student. The game also rotates through a daily schedule, so you have to manage your time wisely to complete everything you want to, and while the game is mostly open-ended, there are many different tasks and a general plot that leads you through the game. Stardew Valley provides just enough structure to keep the game interesting and progressing forward, yet is open enough to allow the player to create their own paths as well. That is my favorite thing about the game, and why I truly believe it to be superior. Everything, from the peaceful music to the cheery graphics, will engulf you into the fictional setting of Pelican Town, and you’ll soon find yourself engrossed in the drama of the local townspeople and the world around them.

Oftentimes role-playing games like Stardew Valley or Animal Crossing are looked down upon as being basic and overrated. I think this is because the games were popularized by people that don’t typically play a lot of video games, and I don’t think the hate is deserved at all. Both of these games are incredibly detailed and provide the players with a plethora of opportunities and pathways. They have great storylines and provide an alternative to the mainstream violent video games that are popular among hardcore players.

That isn’t to say that “hardcore gamers” don’t enjoy Stardew Valley either. Plenty of my “gamer” friends, who actively enjoy competitive games like Overwatch, also find themselves intrigued by the creative world of Stardew Valley. People don’t value Stardew Valley as much as these competitive games because you aren’t really winning anything, and you don’t receive ratings or points. While you don’t get this sort of instantaneous gratification in Stardew Valley, I would argue that just because a game isn’t competitive doesn’t mean it’s a lesser game. The progress and gratification are still there — it’s just more gradual. When you take a look back at your farm after a while of playing, you’ll see how far you’ve come. The game also offers progress monitoring through tracking your skills (such as farming, mining or fishing) and your relationships with the NPCs. Besides, I don’t want to say competitive games are a battle of the egos, but they kind of are. While I’m immensely proud of Lilac Haven (my beautiful Stardew Valley farm) I wouldn’t curse out a middle schooler if they had a better farm than me, catch my drift?

The communities of competitive games like League of Legends or Rainbow Six: Siege tend to be a bit toxic, as told to me by individuals familiar with the games, but you won’t find that in Stardew Valley. Instead, you’ll just find a group of individuals that enjoy the game’s relaxing atmosphere and are willing to offer tips and tricks to mastering the game.

To sum it up, why is Stardew Valley the best game out there? It’s relaxing, it’s non-toxic, it’s cute, it’s creative, and it’s fun. While I admit that’s a bit of a silly summary, it’s the simplest way to put it. I believe in Stardew Valley superiority, and that’s that.