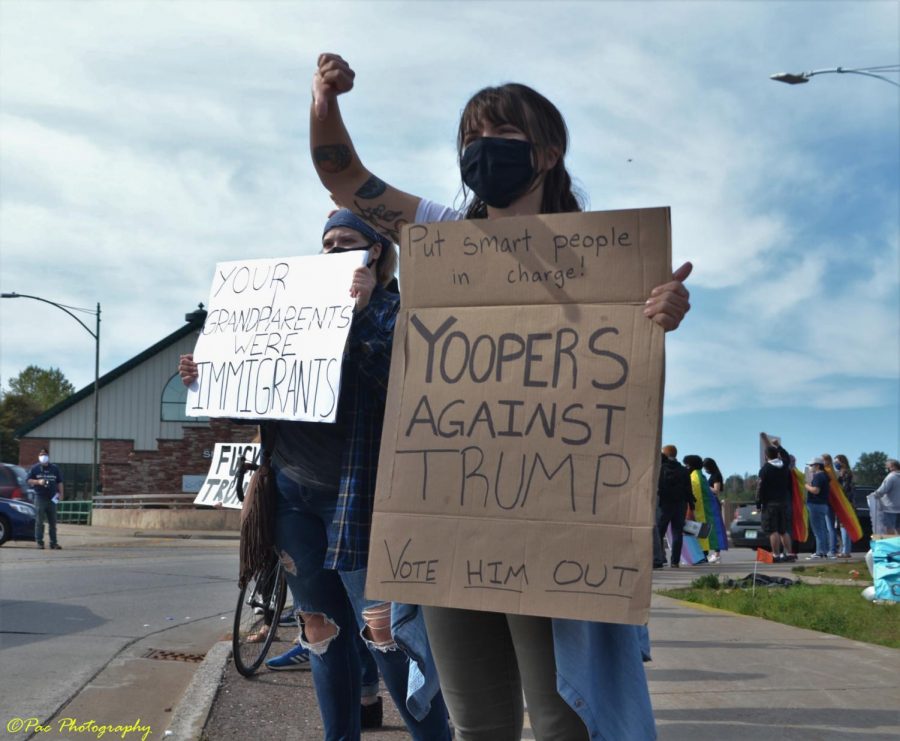 People from both sides of the political spectrum gathered on the bridge last Sunday during a parade hosted in support of President Donald Trump Photo Credit: Avery Mosley

This past Sunday, a group of President Donald Trump supporters gathered in the Rozsa Center parking lot in preparation for a parade that would take them through the Keweenaw in their support of the president. The news of this event was spread through a Facebook post and invited individuals to drive through Houghton, Hancock, Lake Linden and Calumet before returning to Houghton at the Portage Lift Bridge.

This rally was met with a counter-protest at the Portage Lift Bridge, also organized through Facebook. Counter-protesters met with signs ranging from asking people to vote in November to displaying grievances they had with the current administration and its supporters. Parade participants decorated their vehicles with American flags, Trump 2020 signs and more regalia in support of the president. Tensions were heated amongst both groups as they met on the bridge with their opposing viewpoints and criticisms of each other, the presidential candidates and the political parties.

As the rally continued, a small number of Trump supporters gathered on the other side of the bridge from the counter-protesters. The two groups shouted back and forth across the bridge for a short time and individuals in passing cars yelled out at counter-protesters, but nothing escalated further between the two opposing sides.

A police presence following the rally through the entirety of the route to ensure things remained peaceful. At the bridge, officers also gathered to maintain the peace.