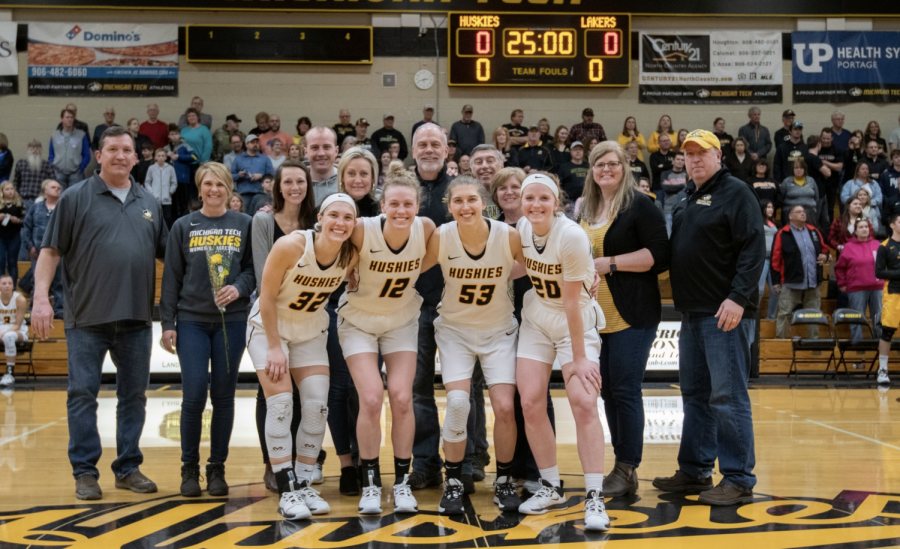 The Michigan Tech women’s basketball team fell to sixth ranked Grand Valley State 70-49 in a Great Lakes Intercollegiate Athletic Conference contest Saturday afternoon at the SDC Gym. The Huskies battled the Lakers to a 27-27 tie through 20 minutes before Grand Valley State put together a strong second half to pull away.

“I was really proud of the way that our team came out and competed this afternoon,” Michigan Tech Head Coach Sam Hoyt said. “I thought that they left it all out on the floor today and that is all we can ask. They competed hard against a phenomenal Grand Valley State team and there is a reason why they are the sixth ranked team in the nation. Unfortunately, in the second half we turned it over a bit too much, but overall our effort was outstanding.

“We will move on to Northern Michigan week and as much as today’s loss stings, we are preparing for Thursday and will learn from this game. With our defensive effort today and the way we played our hearts out, I’m looking forward to Thursday and how we bounce back. It is never easy to play at Northern Michigan, but our team will play with a ton of heart and passion and in this rivalry game it is always competitive.”

Michigan Tech (10-16, 8-11 GLIAC) started quickly on Saturday when senior Abbie Botz put the Huskies on top 2-0 with a mid-range jumper just over a minute into the first quarter. Grand Valley State (25-2, 17-2 GLIAC) tied the game on the ensuing possession via a layup from Maddie Dailey, but Tech would reel off the next five points create a 7-2 lead. Junior Cassidy Trotter connected on a jumper followed by a triple from Botz on the wing with 5:44 to play in the first quarter.

Tech’s defense continued to keep the Lakers off balance by forcing turnovers and disrupting their movement on that end of the floor. The Huskies opened up a six-point lead at 14-8 on another trey by Botz and then freshman Sara Dax helped create a 17-10 advantage for the Huskies going into the second period. Dax advanced to the rim for a layup and following a Grand Valley State foul, made good on a free throw for a conventional three-point play.

However, the Lakers began to get back on track with the first seven points of the second quarter. Cassidy Boensch tied the contest at 17-17 on a layup, but the Huskies responded with four of the next five points to reestablish 21-18 lead on two Dax free throws with 6:24 to go until the break. The two sides then exchanged baskets for the remainder of the quarter and with 37 seconds to go in the half, Tech freshman Claire Barghahn knotted the game again at 27-27.

Michigan Tech and Grand Valley State continued to trade field goals at the outset of the third quarter. The Lakers eventually went up 41-36 on a Boensch jumper with 5:46 on the clock and three minutes later increased the gap to 52-40 on a Jenn Deboer triple. Dax helped the Huskies slice their deficit back to single digits at 52-44 on a layup going into the fourth quarter, keeping Tech within striking distance.

However, the Lakers would put together a dominating fourth quarter to pull away for the win. Grand Valley State placed the first nine points on the board in the final period and didn’t permit Tech to score until a Trotter three-point bucket with 3:30 left in the contest. The Lakers ended up outpacing the Huskies 18-5 in the fourth period, resulting in the 70-49 final score.

Trotter paced the Huskies with 15 points, grabbed nine rebounds, and dished out four assists in the game. Botz followed with 14 points and hauled down a game high 12 rebounds while Dax and sophomore Ellie Mackay chipped in seven and six points respectively. As a team, the Huskies connected on 19 of 62 shots from the field (30.6%), were 5 of 16 from three-point range (31.3%), and converted 6 of 7 chances at the free throw line (85.7%). Tech out-rebounded the Lakers 43-34 and scored 28 points in the paint.

Boensch fired in a game high 30 points for the Lakers, collected a team best nine rebounds, and blocked five shots on Saturday. Maddie Dailey along with Taryn Taugher added 11 points while DeBoer posted eight points. The Lakers found success on 26 of 56 shots from the field (46.4%), were 3 for 15 from three-point land (20.0%), and 15 of 21 at the charity stripe (71.4%).

The Huskies will wrap up the regular season on Thursday at rival Northern Michigan and can clinch a spot in the GLIAC Tournament with a victory. The tip-off is scheduled for 7:30 p.m. Eastern time.