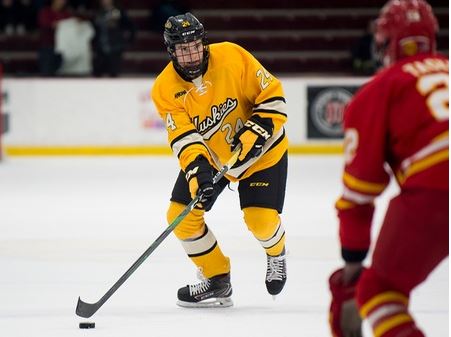 Michigan Tech’s Colin Swoyer has been named the WCHA Defenseman of the Week the league announced Monday (Feb. 17). Swoyer led WCHA defensemen with three points and two goals over the weekend as the Huskies swept Ferris State.

Swoyer, a sophomore from Hinsdale, Illinois, scored both of Tech’s goals Saturday in a 2-0 shutout. He scored the game-winner 11:38 into the third period and then added an empty netter with 38 seconds left in the game. Swoyer also assisted on Keegan Ford’s first-period power-play goal Friday.

Swoyer has 17 points this season on four goals and 13 assists. He also scored in a 3-2 win versus Northern Michigan and had a goal and an assist in the Winter Carnival opener against Lake Superior State. Swoyer has a pair of three-game point streaks this season and has a plus-2 rating and ranks fourth in the WCHA with 47 blocked shots.

Tech is 18-14-3 overall and 13-11-2-0 in the WCHA and has the weekend off before wrapping up the regular season against Northern Michigan on February 28-29. The two teams will meet in Marquette on Friday and Houghton Saturday. Seniors Raymond Brice, Keegan Ford, Matt Jurusik, Todd Kiilunen, and Alex Smith will be honored after the final regular-season game on February 29 for Senior Night.