The Lode takes on the All-Nighter 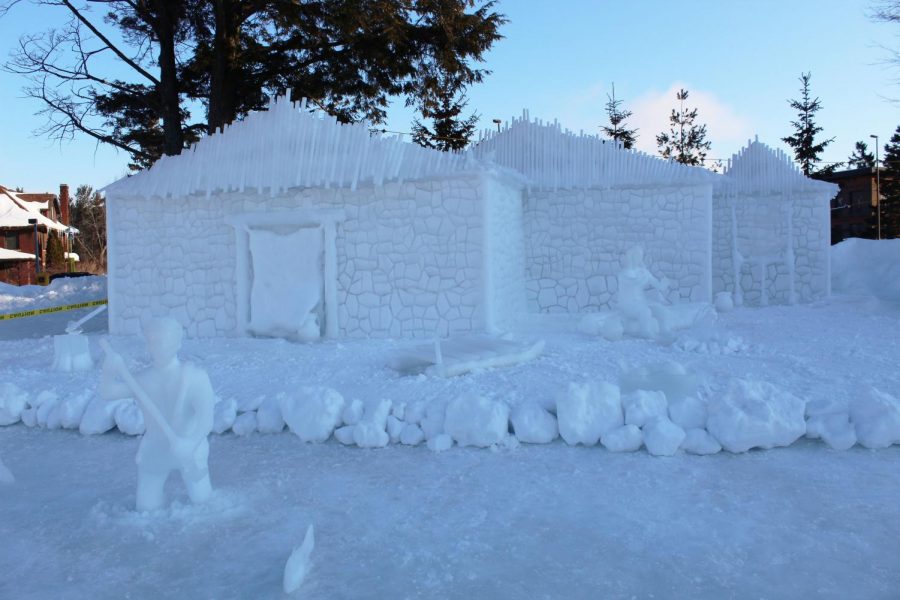 Unless you’ve been living under a rock (or a snow bank, which is more likely in Houghton) then you know that Michigan Tech celebrated its annual Winter Carnival this past week. Included in the festivities were the annual Winter Carnival Queen contest, broomball games, a beard competition and, perhaps the most well-known aspect, the snow sculptures. While a few groups participate in the month long contest, many more choose to participate in the All-Nighter. These groups had from 4 p.m. Wednesday afternoon until 9 a.m. Thursday morning to build, sculpt and perfect their masterpieces of ice and snow.

The Lode staff is never one to back down from some fun, so  this year we decided to join in one the challenge. I’d never personally participated in the All-Nighter, and it was the first time building a snow sculpture for many of the other Lode members, too. Equipped with too few shovels, three buckets and a machete, we set to work building Sid from the Ice Age movies.

Some teams set out with a strict agenda on the night of the All-Nighter with victory in mind. They came with buckets, shovels, irons, plywood, machetes and blueprints in hopes of taking home one of the top titles. They’ve spent weeks planning out their statues, perfecting every minuscule detail so that everything goes just right, and their efforts certainly paid off! The Lode staff didn’t put quite that much time and effort into the statue, but then again, we were there to have fun and enjoy a Michigan Tech tradition, not bask in the glory of our winning snow statue.

Beyond the statue contest, campus had much more going on during All-Nighter. Carnival goers gathered near the makeshift mosh pit situated near the M&M building with its giant snow-encapsulated speakers that blasted music for everyone to hear. While my friends and I found the music taste hard to enjoy, many other students seemed to be having a good time and it certainly livened up the frosty atmosphere.

Other students gathered near the IRHC broomball Cocoa Shack for their free hot chocolate, provided in a souvenir IRHC mug for students with their MTU ID. Many students (like myself) also didn’t have time to catch dinner between their Wednesday afternoon classes and the beginning of the statue building, but lots of student organizations were on campus selling a variety of foods that are much better than anything we’d find in a dining hall. Everything from the easy-to-eat walking tacos sold by the Society of Women Engineers to Triangle Fraternity’s hot, delectable pasties to the ROTC all-night pancake buffet were available for enjoyment.

While it was undoubtedly chilly during the All-Nighter, the weather for 2020’s Winter Carnival was pretty great overall! A warm hat to cover your ears (thanks, Bonnie) and a free cup of IRHC hot cocoa combined with the physical task of building a snow sculpture was pretty good at holding the cold off. Also, many buildings on campus were available as warming stations so students and other Carnival visitors didn’t get stuck out in the cold. As the familiar lake effect snow and Keweenawan winds held off decently during Winter Carnival, the weather didn’t put a damper on the fun of the All-Nighter. Despite the few controversies that surrounded this year’s Winter Carnival, one would be hard pressed to find someone not enjoying the best Wednesday of the year during the All-Nighter.