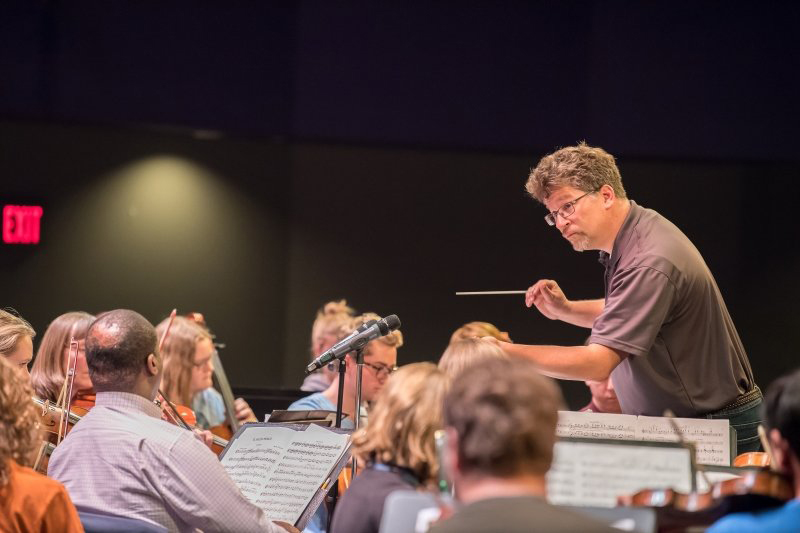 The conductor of the Keweenaw Symphony Orchestra is Joel Neves, MTU's Assistant Professor of Music and the Director of Orchestral Studies.

The Copper Country is blessed to have such great musical exposure, thanks to all the talented individuals that live in the area. This Saturday, April 20 at 7:30 p.m. in the Rozsa Center for the Performing Arts, the Keweenaw Symphony Orchestra will be presenting their concert, “Rhapsody in Blue,” where they will perform the titular piece, composed by George Gershwin, along with a few other selections.

Gershwin wrote “Rhapsody in Blue” in 1924. The orchestra-jazz style rhapsody premiered at New York City’s Aeolian Hall, with an audience made up of other famous composers, like Igor Stravinsky, John Philip Sousa, and Leopold Stokowski. Three years after its successful debut, Gershwin’s piece had sold over a million copies and had been performed over 80 times.

The Rhapsody, which was initially too long to fit on a record the way it was played in concert, had to be sped up in order to fit. The piece has been referred to as a musical representation of New York City, and that reference has been shown throughout popular culture after the song’s premiere.

Though the piece has been well-known in the music world since its debut, it has quickly risen to fame in more popular culture following its inclusion in Disney’s 1999 musical and cartoon movie masterpiece, Fantasia 2000.

Other companies have also used the piece for projects of their own. United Airlines has used it for background music in their safety videos and advertisements, while Baz Luhrmann’s 2013 screen adaptation of F. Scott Fitzgerald’s “The Great Gatsby” featured it to announce the appearance of Jay Gatsby himself.

Also to be featured by the KSO Saturday night will be Igor Stravinsky’s ballet “Firebird Suite”, which premiered at the Paris Opera in 1910. Initially written as part of a ballet performance, “Firebird Suite” is based on Russian folk tales and follows the story of Prince Ivan, who falls into the realm of the mysterious immortal Koschei.

In popular culture, the piece has been featured at the Sochi 2014 Olympic Winter Games as part of the opening ceremony, and, like Gershwin’s “Rhapsody in Blue”, was also used by Disney in Fantasia 2000.

Austrian composer Arnold Schoenberg’s Chamber Symphony will also be performed by the KSO. The Chamber Symphony No. 1 premiered in Vienna, Austria in 1907, while No. 2 wasn’t completed until 1939. Schoenberg is described as being part of the German expressionist movement in the early 1900s.

His works were labeled as degenerate music during the rise of the Nazi Party in Germany due to his modernist approaches. He eventually immigrated to the US in 1934. Schoenberg was said to be extremely superstitious, and interestingly had triskaidekaphobia (fear of the number 13) and believed he would die during a year that was a multiple of the number.

On his 76th birthday, the composer was warned by an astrologer that the year would be dangerous, as 7+6=13. Anxious and sick, Schoenberg eventually did die at age 76th, on the 13th day of July.

The Keweenaw Symphony Orchestra has a long history of making beautiful music at Michigan Tech. Made up of students, faculty, staff, and community members alike, the KSO has been bringing a true symphonic experience to the Copper Country since its founding in 1971. They perform around 5 concerts a year, covering anything from orchestral masterworks to musical theatre, and even do tours around the Midwest every few years.

The orchestra is conducted under the talent and expertise of MTU’s Assistant Professor of Music and Director of Orchestral Studies, Joel Neves. Neves is the 7th director the KSO has seen and brings much to offer to the talented group.

Once again, the Keweenaw Symphony Orchestra will be presenting Rhapsody in Blue, along with some other fantastic pieces, at 7:30 p.m. on April 20 in the Rozsa. Tickets for the event will be $19 for adults and $6 for youth. MTU students will be covered by the Experience Tech Fee.

With the spring semester winding down, this will be the last chance for some of us to take in a good symphony concert for a while.

The concert will also be a great opportunity to get out and relax before beginning the dreaded final exam preparations while also supporting your fellow Huskies and community members.