Parade of Nations 2018 with Michigan Tech 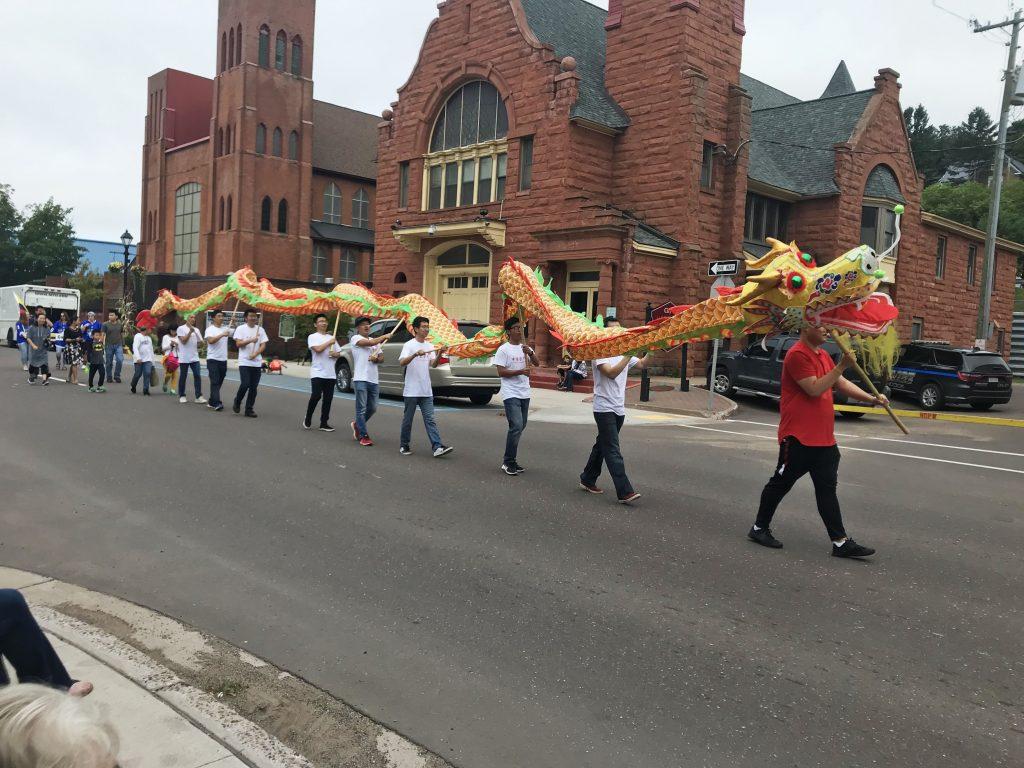 The Chinese community here in Houghton had not only a float but followed up with a gorgeous, swaying Chinese dragon.

I awoke Saturday morning to the blare of the Michigan Tech pep band beginning their pre-parade practice across the street from my home in Hancock and became suddenly aware that the Parade of Nations would be taking place just one street away from me. A small crowd had already gathered, and true to Tech-time, the parade began at exactly 11:05 a.m. A beautiful rendition of the national anthem echoed through the street as everyone turned to face the flag down a way.

The pep band started off loud and cheery as they made their way down the street followed by floats and people of all nationalities who had come together to celebrate their unique traditions and styles. The Parade of Nations featured a float contest, and while there weren’t many floats, the ones that were there were beautiful to behold. Students and people from China had a trailer filled with colored balloons and were trailed by a group of people carrying a dragon which swayed and danced with the beat. The Indian float followed those carrying the flag in beautiful silks and colorful clothes and consisted of people holding constructed instruments that are traditional in India.

There was a lovely float with a gorgeous bridge across it and the people walking alongside handed out fliers explaining their float which was a bridge that connects Denmark and Sweden by turning into a tunnel that goes underwater. The Keweenaw Bay Indian Community came in with a bang on a small float where a circle of people pounded a rhythmic beat on traditional drums and chanted as performers following the float danced in traditional attire with bells jingling and bright colors catching the eye of those watching.

The parade made its way from Hancock to Houghton via the lift bridge and all the way up to the Dee Stadium where international booths had been set up to celebrate complete with varieties of cuisine from the different places and plenty of items and flags for people to look at or buy and enjoy. The event continued on at Dee Stadium with performances from the different parts of the world, music, food and laughter.

The multicultural festival included everything from dances from here in the Copper Country to foreign and exotic performances, not only in dance but also theatre. The festival ended at 3 p.m., but the fun continued.
At 7 p.m. the headlining act, Olé, began at the Rozsa Center and delivered a truly phenomenal performance.

The Parade of Nations event includes a float competition where the first place university and community floats receive $200 each and the second place university and community floats receive $100 a piece. In addition, from everyone in the parade to those watching and supporting were able to be entered to win a Chicago getaway package for two. The float winners, as well as the Chicago getaway winner, was announced at the Dee Stadium during the festival.

If you couldn’t make it to the parade this year, definitely consider going next year because this is a fun, refreshing way to learn something new about the world that surrounds us right here at home.