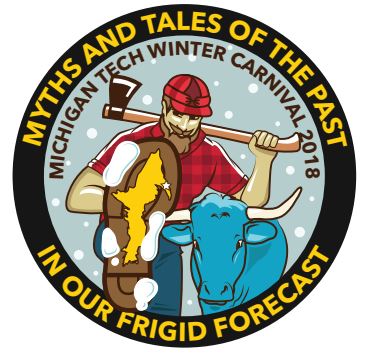 The Winter Carnival logo for 2018.

Winter Carnival this year is shaping up to be quite the spectacular event. This year will be the 96th annual celebration and the theme is “Myths and Tales of the Past in Our Frigid Forecast.”

On Jan. 27, the weekend before Winter Carnival, the Yooper Sprint will take place at the Softball Diamonds from 10 a.m. until 2 p.m. At the same time, in the same place, Snow Volleyball will also be going on. There will be curling games on both Jan. 27 and 28 from 3 p.m. until the finish and from 10 a.m. until the finish, respectively. This event will be held at the Calumet Drill House. Also on Jan. 28, there will be another round of Snow Volleyball held from 10 a.m. until 2 p.m. on the Softball Diamonds. At 1 p.m., Cross Country Skiing will take place in the softball diamonds parking lot.

On Jan. 30 and Feb. 1 from 9:30 p.m. until 1 a.m., Ice Bowling will be thundering along at the Dee Stadium. On Feb. 3 from 8 a.m. until 4 p.m., Ice Fishing will be held at the Chassell Bay, if you are participating, be sure to check in at the Sigma Rho house. From 8 a.m. until 11:30 a.m., Speed Skating will be racing the rink at Dee Stadium. Another round of Curling will be available from 11 a.m. until the finish, also on Feb. 3 at the Calumet Drill House. From 7 to 9 p.m., the Queen Coronation will be taking place at the Rozsa Center. During this coronation, there will be a raffle drawing at 7 p.m. On Feb. 4 from 8 a.m. until 8 p.m., there will be various broomball games being played at the broomball rinks.

Feb. 7 kicks off the beginning festivities of Winter Carnival with the All-Nighter statue building competition beginning at 4 p.m. There will also be karaoke from 8 p.m. until 11 p.m. in the MUB Commons. Near Fisher Hall, the MUB Board has sponsored free hot chocolate to be handed out from 8 p.m. until 11 p.m., so be sure to stop by and grab a warm cup before touring the in-process snow sculptures! From 8 p.m. until 4 a.m. the ROTC will be serving pancakes, another opportunity to warm up and fill up before adventuring in our man-made winter wonderland.

On Feb. 8 the festivities continue with broomball games from 11 a.m. until 5 p.m. At 1 p.m. in Fisher 135 the Beards Competition will take place to see who grew the best full beard, sideburns, or goatee/mustache. There will also be a crash course for dancing held in the DHH Ballroom from 2 p.m. until 5 p.m. in anticipation of the SnoBall. From 7 p.m. until 10 p.m. the Bigfoot Glowshoe event will be taking place on the Tech Trails. This event is recreational snowshoeing for beginners to advanced and for people of all ages. The cost for this event is $5 for children under 12 and students and $15 for adults and community members. At 7 p.m. the Stage Revue will be playing at the Rozsa Center. The general admission for this event is $10, or free for MTU students.

On Feb. 9, the Human Dog Sled Race will occur at 11 a.m. at the softball diamonds. Also at the softball diamonds, Tug-of-War will begin at 11 a.m. and go until 4 p.m. There will be downhill skiing at the Mont Ripley Ski Area at 12:30 p.m. Also at Mont Ripley, there will be snowboarding at 3 p.m. At St. Albert the Great, at 5:30 p.m., there will be an Ice Mass in the Ice Chapel on the lawn. At 7:07, p.m. there will be a hockey game between Bemidji State and Michigan Tech at the MacInnes Ice Arena, another game between the two teams will be held on Feb. 10 at 5:07. On Feb. 9 at 9 p.m., Josh Blue, this year’s Winter Carnival comedian, will be performing at the Rozsa Center.

On Feb. 10, at noon, Snowman Left Behind will be an event going on at the Sherman Field. MTU will be attempting to break the world record for the most snowmen built in one hour. With enough people, there is a chance that the MTU snowmen could end up in the Book of Guinness World Records. 2018Building will begin at 1 p.m. At 8:30 p.m. an Awards Ceremony for the winners of Winter Carnival will be held at the Rozsa Center. At 9 p.m. there will be a Downtown Businesses Bonfire at the Waterfront Firepit. At 9:15 p.m at the Mont Ripley Ski Area, there will be a Torchlight Parade and Fireworks. Finally, to finish it all up and bring the 2018 Winter Carnival to an end, the annual SnoBall dance will be held in the Rozsa Center at 9:30 p.m.