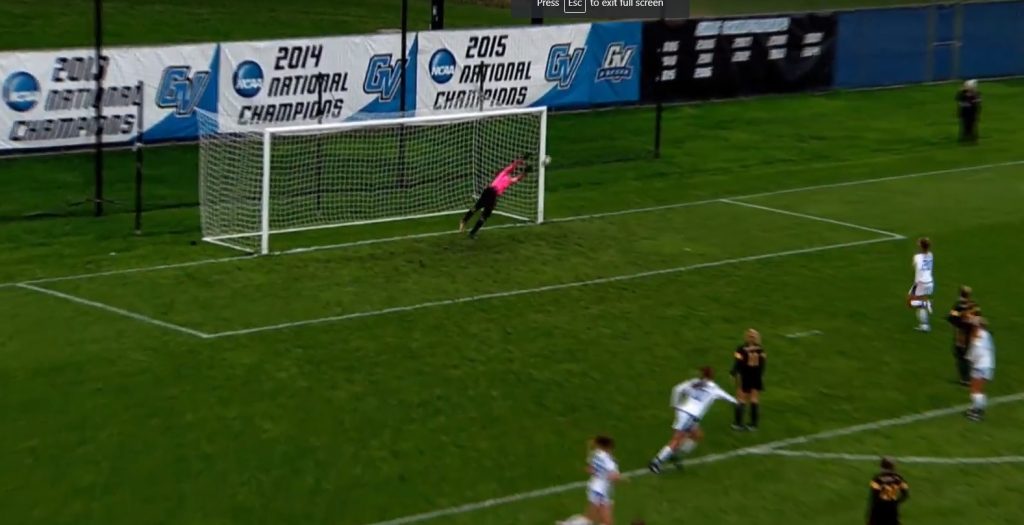 The first goal scored against the Huskies during Tuesday’s loss to Grand Valley. Image courtesy of the Grand Valley State Lakers

The Huskies lost a non-conference match 1-0 to the Northern Michigan Wildcats in second overtime on Friday afternoon at Sherman Fields. Jenna Halonen assisted by Abby Cook scored in the second overtime, which lead NMU to a victory.

“This was a tough loss for us tonight,” Michigan Tech head coach Michelle Jacob said. “We can’t expect to win games if we don’t finish our opportunities. We created plenty, but weren’t able to get it done.”

The Wildcats made their intentions clear when Cook took the first shot on goal in the very first minute of the game which was deflected by the senior goalie Kirsen Hudak. That was immediately followed by a wide shot taken by Aimee Colla of the Wildcats. The attacks on the Husky goal post were retaliated with a wide shot taken by junior Rachel Wall.

In the first half of the game the Wildcats generated four corner kicks. The Husky offense recovered momentum in the twenty-fourth minute with the help of a corner kick and a wide left shot taken by Brooke Schauer. Emily Zeitunian and Jesse Jacobusse also took shots in the first half but were unsuccessful, ending the first half with a score of 0-0.

The second half started as aggressive as the first with both the offenses generating opportunities, but the goalkeepers made sure to keep the competition scoreless.

Tech maintained its attacking momentum in the second half with Jacobusse shooting at the net for a second time in the 50th minute but Brianna Frontuto made a brilliant save for the Northern Michigan. That was followed by the series of shots taken by Sarah Boyd in the 58th minute. Boyd took three shots, the most by any Tech player.

The Wildcats had a few scoring opportunities in the second half but Hudak made sure that scoreboard did not budge. Hudak made a brilliant series of saves on the shots taken by Sophia Sachs and Madison Hamilla in the eighty-third minute of the game. Hudak made five saves while playing all 103 minutes in front of the net.

Each team had just one shot in the first overtime. Allyssa Milam missed wide of the net for Northern Michigan countered by a shot on goal from freshman Kassity Swanson that was saved by Frontuto. In the second overtime, Cook delivered the ball past the Tech defense to Halonen, who scored the winning goal for the Wildcats.

The Huskies traveled to Grand Valley State for the GLIAC Tournament Quarterfinals on Tuesday and fell 5-0. Check back next week for more detailed coverage of the tournament.